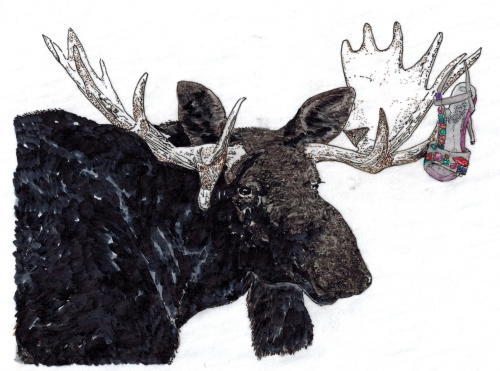 she tried to give me the shoe several times.

i thought it was because i had lent her some money and she felt bad about it. she said the shoe had been appraised for something like $5,000.00.  she said that if she died she wanted me to keep the shoe. don’t let anyone take it from you, she said.

i also knew the shoe’s history. to whom it had been given, and who had done the giving. there were things about the shoe that only she and i knew. there was a time when i wanted everyone to know that history. times she and i had fought over the telling and the not telling. she was older than me. she knew that sometimes it is better to hold an ugly thing tight and close, and in this way, defeat it.

when she died, it took me a whole day to drive down out of the mountains to reach her home. when i arrived, my brother had the shoe on a chain around his neck. the first thing he did was remove it from his neck and hang it around mine. she wanted you to have this, he said.

it takes a lot of paperwork and phone calls and trash bags and coffee when someone dies: even when they are a rugged individualist and often say fuck the government, and really want to leave the planet in as simple a way as possible. still, that’s not what happens.

my brother and i drove around together for a couple of weeks, picking up and dropping off pieces of paper. once it was mostly settled, i figured it was time to head home, back up into the woods.

when i got there, my answering machine was blinking. one of the messages was from the original owner of the shoe. i hadn’t spoken to her in about 20 years. all she said was, where’s the shoe? then she said her phone number and hung up.

i pulled the shoe out of my shirt, where it still hung on the chain, next to the metal tag from my mother’s box of ashes. following her final orders, we had thrown her in the lake. i wanted to throw the shoe in the lake too, but it didn’t seem fair. she had left it for me to decide what would become its history.

i pulled off my boot and my sock. i slid the shoe off its chain and onto my foot. it was far too small, though i jammed my toes in as far as they would go. even with the buckle undone, the strap did not reach anywhere near my ankle.  it was a kitten heel with fake sapphires and rubies and topaz and amethysts and emeralds glued all over its gold lamé surface. it was a godawful shoe, but you can’t choose the vessel of a story any more than you can choose what happens to you, or to the people you love, who die and leave you holding the shoe.

just then, i knew exactly what to do. i opened the back door and flung the shoe as hard as i could. i was aiming for the creek at the bottom of a small ravine that runs behind my house. let the water and rocks wear it down until it’s beautiful. let it disintegrate. let it be forgotten, i thought.

unfortunately, i threw it too hard. it flew over the ravine and bounced up the slope on the other side, landing squarely heel-down and toe-forward on a tree stump where it was framed by my kitchen window. its fake jewels glittered in the sun.

the whole situation reminded me of other shoes i’d read about. cement shoes that dragged down the people that wore them. shoes that made people dance until they went mad. shoes that wouldn’t allow themselves to be removed. shoes that transported the wearer home, or away from home, depending. shoes that led people to lost love. shoes that tripped the wearer just as they were about to outrun the monster.

that night, it rained. i kept looking out the window to see if the shoe was still there, hoping it would be washed away, but in the illuminations of the lightning, it would appear, glimmering. i was going to have to go out in the morning and get it and bring it back. i should have known it would not be so easy, that a simple, decisive act could not release me. the next time the original owner of the shoe called, i would have to lie. i’d have to keep the monster with me, in order to keep everyone else safe.

i woke to the sound of the phone ringing.  it was the original owner of the shoe. did you find it? i’m sure it was somewhere amongst her things, my grandmother asked. i looked out the window. the shoe was no longer on the stump. i stood to get a better look. the ground around the stump was empty… just some animal tracks in the mud.

I told her the truth.

I have no idea where that shoe is, I said.

Error: Twitter did not respond. Please wait a few minutes and refresh this page.

This Ensatina was tucked safely under the bark of a decaying redwood on Mount Wittenberg. It’s eyes look like they are filled with tiny green fires. Until that moment, I did not know that Ensatinas even existed- I knew newts and salamanders, but here was something completely new! Alone in the woods- this is my church. #ensatinaeschscholtzii #ensatina #mountwittenberg #redwoodforest
this book got me out of bed at 5:30am just to have a few extra minutes with it before I have to go to work #mushroomsoftheredwoodcoast @myconomad @biodiversiphile thank you for this book!
Isn’t it gorgeous? It’s a Manzanita bolete, a mushroom that grows in association with Manzanita and Pacific Madrone. I lucked out on this find- took a wrong turn on a trail and got an unexpected reward. #bolete #mushrooms #mushroom @inaturalist #manzanitabolete #leccinum
I grew up in SoCal- a more arid, desert-based climate where scorpions under the bathmat and rattlesnakes by the front door were not unheard of. Imagine my surprise at finding this beautiful beast, a Western Forest Scorpion, hiding on a damp log in the NorCal Oak scrub. I did a little happy dance. #scorpion #forestscorpion @inaturalistorg
nothing like hiking alone in the woods and... #creepydoll
so this happened in my backyard this morning. this is not my jar of peanut butter (wrong brand). #squirrel #peanutbutter #backyardwildlife